Howdy everyone! Good news! Blizzard has posted another instalment of their “ArtCraft” series and this one shouldn’t disappoint. This time around they’ve released images of the Orc Female,

At Blizzcon 2013 a few months back, Blizzard announced they would officially be redesigning the old character models. They have been releasing previews of new content in preparation of Warlords of Draenor through the avenue of their new articles: ArtCraft. This is the third installment of the new ArtCraft series and we really like what they’re doing with it.

Today they have shared with us the Orc Female and they take us through the design revamp, from the art process to the overall design philosophy. It’s a really interesting read and we believe the new Orc female model looks really good. Even good enough to actually roll a Orc female healer!

Welcome to the third edition of Artcraft! I’m Chris Robinson, senior art director for World of Warcraft, and today we’ll be discussing the revamp of the female Orc model. As part of that, we’ll touch on our overall character redesign philosophy, show before and after images, talk about our art process with this particular model, and give you a glimpse at some of her awesome facial expressions courtesy of our animation team. 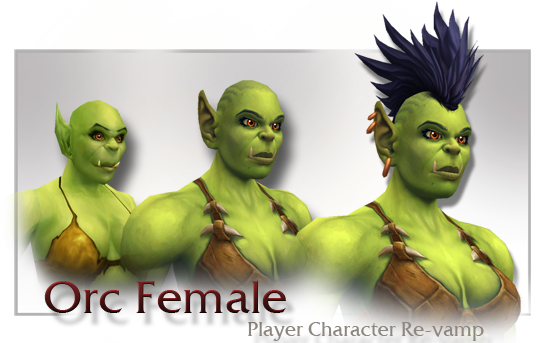 Before we start talking specifically about the female Orc update, I’d like to address some questions we’ve received regarding our goals for these revamps. Boiling it down to essentials, our primary focus is to upgrade the aspects of player character models that currently exist in-game.

We’re all creative people with tons of great ideas, and we could certainly keep designing and redesigning and never actually release anything—and while we’d no doubt have a lot of fun doing that, obviously we need to set specific goals so we can actually create finished artwork for you to see and play. That’s not always easy to do—we’re a passionate bunch, and we get incredibly excited about new features and want to do everything. Nonetheless, staying focused and keeping the scope reasonable (while still ambitious) helps us stay on track and avoid having to make painful cuts later on down the line. We really wanted to prevent that with the player-character revamp, so we made the decision early on to stay focused on improving what already exists in-game, and making sure we really nail it.

That said, we’ve also read your great ideas and feedback about features that you’d like to see as character customization options. Your collective voice matters to us, and we’d love to bring some of the coolest ideas to life someday if we can. We’ll continue to share behind-the-scenes information with you in these Artcraft pieces, and I look forward to giving you more insight into our plans for character models beyond the initial release of Warlords of Draenor.

Enough about philosophy—now on to the female Orc!

We’ve actually been working on this particular model for quite some time now. You may have caught some brief glimpses of her new model in the Warlords of Draenor announcement cinematic at BlizzCon. Since then, we’ve been balancing our effort among all of the models currently in progress, and she’s received some additional polish along the way.

When we first discussed the direction for this character, I think we all agreed right off the bat that we wanted to focus on her “warrior” side a little more. That means moving away from the more doe-eyed version we know now toward a character you would expect to see fighting on the front lines alongside any of her Horde brothers and sisters. We’re still ironing out the fine details, so the art you see here is subject to change, but I’ll let Senior 3D Artist Dusty Nolting and Lead Animator Steve Aguilar expand a bit on where we currently are with our green-skinned . . . oh wait, green and brown-skinned, long-tusked heroine. 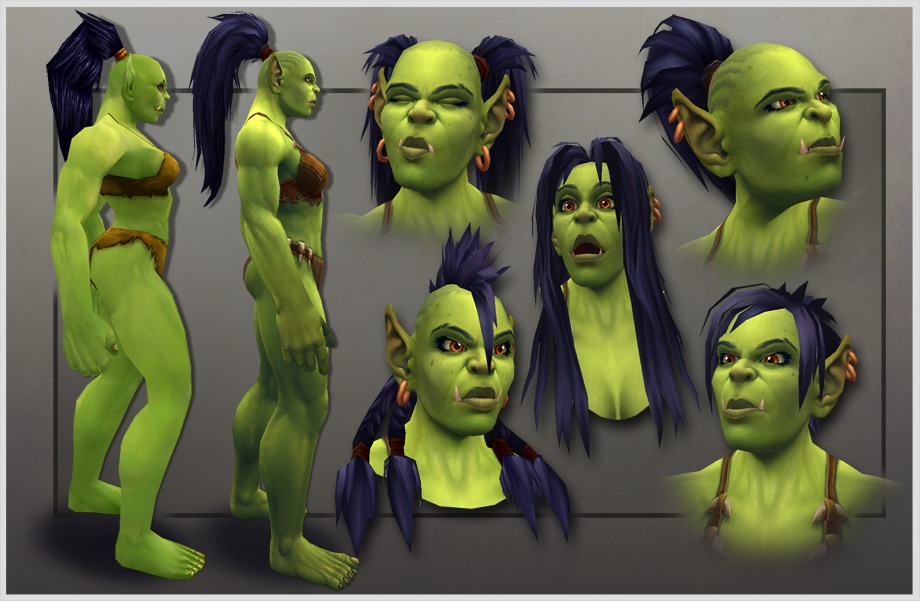 “The original female Orc’s facial expression is pretty much a blank stare, which sadly doesn’t convey much life or personality. We wanted to give her more of an edge so she would project a confident ‘Don’t mess with me!’ attitude. Now that these new high-definition models have a facial rig attached, the animators can bring to life the personality that has been so sorely missing. She now looks and feels more like you’d expect an Orc to. When you get your hands on the expansion, be sure to take a look at her talking animations, dancing animations, and emotes to see all the various expressions the team has created for her.” 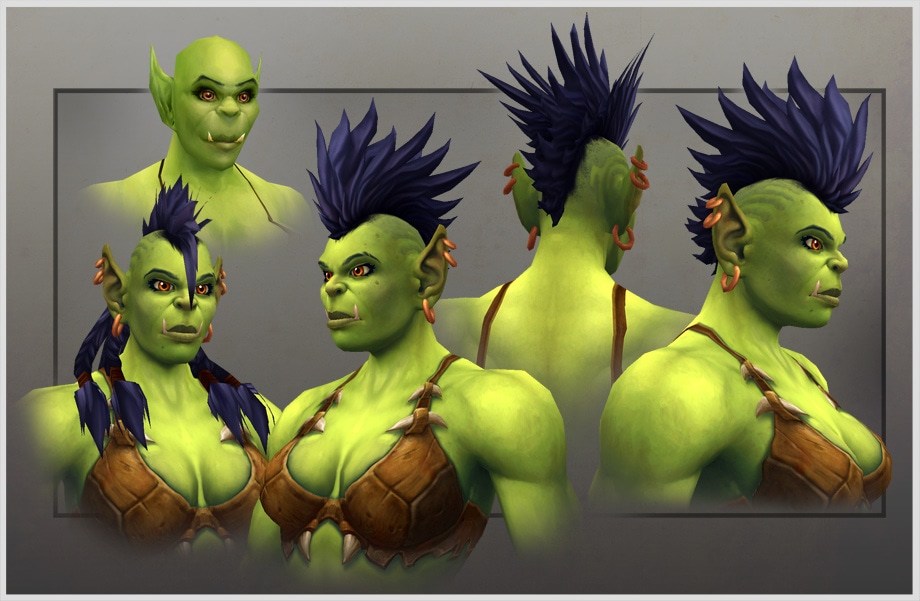 “Orcs are one of the most iconic parts of the Warcraft universe. Because she’s so identifiable, it was important for us to use the original female Orc as a starting point and stay true to the silhouette and proportions that existed. The goal was a new model with much higher fidelity, while still retaining that classic look. We want a strong female counterpart to the male, equally battle-ready in appearance, yet still feminine.”

That’s all we have for the female Orc right now. We hope you’re continuing to enjoy this series as we invite you to meet the team, get some insight into our development process, and get an early look at some of the art we’re creating for Warlords of Draenor.

Thanks, and see you next time!

Let us know in the comments below!

Originally published on February 20th, 2014 by HealingWoW on HealingWoW.com, Last modified: August 27th, 2014 in the Warlords of Draenor category/s.