Hi everybody and welcome to our first post for the Legion Class Preview Series that Blizzard will be bringing us over the next few days. Today we’re getting a preview into the Priest class and how it will play in the upcoming Expansion, World of Warcraft: Legion

This is a very early preview of the class changes for the Priest and could change before release. Also keep in mind not all As a summary of information for those without the time to read the full post:

Overall, I’m pretty happy with this preview of the Holy Priest. It looks like they’re really trying to change the fantasy of all of the classes, and it would appear they may just accomplish this with the Holy Priest. With the removal of Chakra (thankfully) and the addition of some new “miracle” spells, from being locked out of Shadow spells completely to smiting foes and carrying out sacred justice, I can imagine being immersed in the Holy Priest playstyle.

They were right to remove Chakra, it was a clunky mechanic that was cumbersome to use to say the least. No longer must we stance dance depending on our healing requirements. A Holy Priest in the fantasy should be able to heal as required at anytime. Instead of Chakra swapping, we’ll depend on using our “miracle” spells for huge heals (single or multiple target) and these must be managed in terms of using Serendipity to reduce their cool downs after use. It’s these miracle spells, Holy Word: Serenity (which may just be the biggest single target heal in the game) and Holy Word: Sanctify (a multi target instant) that are going to be the focus of the Holy Priest playstyle.

Prayer of Healing will undertake a huge change as it goes from a large-range group-restricted heal to a raid-wide (up to 5) any group but distance-restricted (15 yards) heal. While Prayer of Healing in the past has been very beneficial for raid-wide damage across far distances, it has often been a pain in pick up groups with leads that don’t understand the mechanics of it. This will ease that burden a little, but it’s going to mean that you’ll need to focus on area damage for this spell rather than group damage.

I did have some concerns about the loss of Circle of Healing, a staple to the Holy Priest for a very long time, and others obviously had the same concerns. @Warcraftdevs has been busy on Twitter responding to questions around the new class previews and had a few things to say about the Priest preview.

@__Yot The current plan is for Holy Nova to be Holy's method of dealing AoE damage.

@ematthewcobb We're currently considering talent options that bring back Circle of Healing, or something similar.

Tha current plan is for Holy Nova to remain, but would be Holy’s method of dealing AoE damage. No mention of it also healing, so assume it will only do damage. As for Circle of Healing (to be continued).

@Caitlin2013D Indeed! We're trying a different targeting method for Prayer of Healing, which makes it more localized instead of group-based.

@Derevka A crit Holy Word: Serenity is basically a full heal. We think that qualifies as "absolutely massive."

@Zolmation No. The spell is now entirely focused into being a very large instant heal.

@Fizzl_CTR @Celestalon Discipline still has Power Word: Shield, but it will have a 6-second cooldown, to reduce spamminess.

@Spotnick Currently 15 seconds, with a talent available to extend that to 20 seconds.

@Lamortykins We'll be making sure that Discipline is still able to heal dungeons comfortably.

@Rhykes_ Nope! Only the effective healing will turn into a DoT.

@Floris257 It gets renewed. We're considering having it behave similar to DoT effects, which have some leeway on when you refresh.

The current plan is to remove Weakened Soul. https://t.co/wWGljzbYXG

@_n_1000 Those were just off-the-cuff examples. Goal is that they provide respectable damage and healing, and we'll iterate as necessary.

The goal is for healing specs to be fully viable for solo questing outdoors. https://t.co/n3mxNyXu0k

Welcome to our World of Warcraft: Legion class preview series. In this entry, we’re exploring the Priest—to find out what’s in store for a different class, check out the overview.

We continue our early look at class and specialization design with the Priest. In these blogs, we’ll be exploring class identity, discussing Legion’s new designs, and presenting core combat abilities for each specialization—laying out the foundation upon which talents and Artifacts will build further. With that in mind, let’s delve into what it means to be a Priest in World of Warcraft.

Priests have a strong identity as spiritual practitioners who harness divine power to inspire and protect allies, heal the injured, and cure the ailed. But while this clearly holds true for Holy Priests, these ideas are less fundamental to Discipline Priests—and the ideals and beliefs of Shadow Priests are antithetical to those of Holy Priests.

Despite these differences, Priests of any spec share one key thing in common: unwavering faith in something from which they draw great power. What delineates specializations is the source of that power. In Legion, we’re going to explore that dichotomy in greater depth than ever through the gameplay for each specialization. 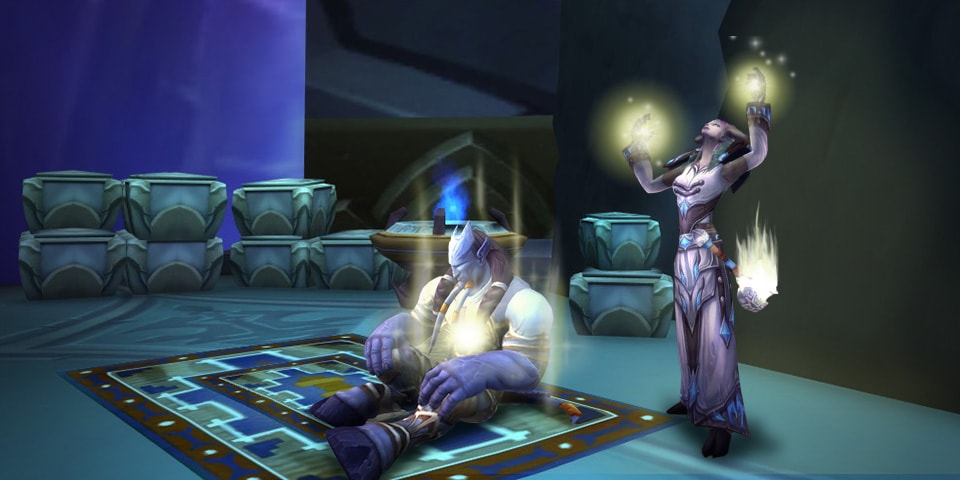 After spending much of their lives in temples studying ancient doctrine, preaching the tenets of their faith, and pledging their full devotion to the divine powers they follow, the most adept priests leave their houses of worship to serve on the battlefield, as shepherd to flock. There, they use their holy powers to bless allies and mend wounds. And while most stay behind the frontlines to aid their comrades, these holy champions are also capable of smiting foes and carrying out sacred justice. They’re also morally opposed to the use of Shadow and Void magic—rather, they are exemplars of the incredible grace and power of the divine and the Light, and even death cannot fully stop their healing capabilities.

“The most adept priests leave their houses of worship to serve on the battlefield, as shepherd to flock”

Given the innate purity of the spec, we want to ensure that Holy Priests continue to have a large repertoire of compelling healing spells. The Chakra system was cumbersome, requiring additional setup to optimally use most spells and restricting how much you could fluidly shift between healing methods. We have removed it in favor of a more dynamic play style focused around Holy Words. New Holy Word spells are designed to feel absolutely miraculous, having huge effects balanced with long base cooldowns. The new passive effect of Serendipity allows those long base cooldowns to be reduced, letting you use them more frequently. Finally, in keeping with the resolute beliefs of the Holy Priest, they can make no use of Shadow spells. Smite, Holy Fire, and Holy Word: Chastise are the instruments used by Holy Priests to inflict damage upon their enemies.

Here’s a basic look at the core combat healing abilities for Holy Priests:

Additionally, to give you an idea of how some talents may build upon this, here’s an example of one of their Holy-specific talents: 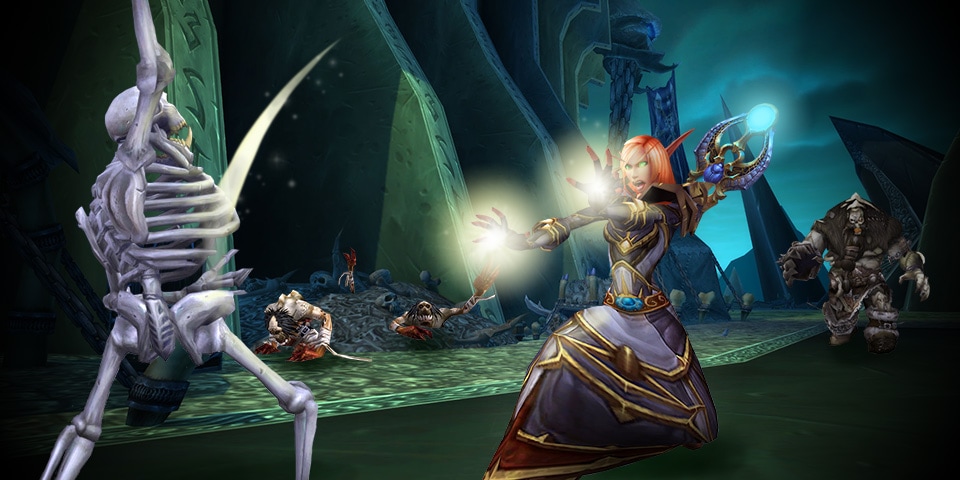 Some priests pride themselves on pragmatism. They understand that light casts a shadow, that darkness is defined by light, and that true discipline stems from one’s ability to balance these opposing powers in services of a greater cause. While these priests possess many holy virtues to aid their allies, they also dabble in the dark arts to debilitate their enemies—always exercising immense discipline to keep themselves away from the brink of insanity. Many would say the ends justify the means; scriptures both virtuous and vile should be studied and understood to protect the congregation.

The power of absorption mechanics has created a gameplay issue for healers that we’re looking to address in Legion. Discipline Priests have been so effective in their role of preventing damage that it has sometimes left other healers yearning for an opportune time to throw out a clutch heal. To alleviate that issue, we’re tempering Discipline’s emphasis on shields in lieu of a reimaged Atonement mechanic.

Discipline Priests are now more clearly defined by their use of both Holy and Shadow magic, and that extends to how they function in combat. Sacrificing a portion of healing ability and having a reduced focus on absorption spells, they gain a significant contribution in damage. Still filling a healer role in group content, they aim to strike a balance between healing allies and damaging enemies in a unique gameplay style. Discipline Priests have strong cooldowns with Power Word: Barrier and Pain Suppression, along with Rapture, a new cooldown that temporarily removes the cooldown of Power Word: Shield.

Here’s a basic look at the core defensive and offensive combat abilities for Discipline Priests:

Additionally, to give you an idea of how some talents may build upon this, here’s an example of one of their Discipline-specific talents: 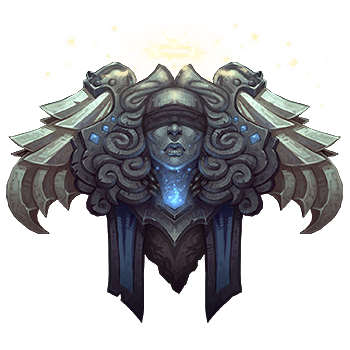 We hope you’ve enjoyed this early preview of our approach to Priest class and specialization design in World of Warcraft: Legion. We’ll continue our review later today with a look at Mages.